Google Chrome finally gets a security feature that notifies the user about extensions installed by third-party software on their computer and Chrome disables them until the user recognizes it. The feature was released in the Chromium build, which may take a few months to become available for the stable version of Chrome. Antiviruses like AVG, Avast and other third-party programs install their extensions on browsers like Firefox, Chrome and Internet Explorer without the user’s consent.

Mozilla solved this for its users with Firefox 8+ version onwards, which now automatically disables add-ons installed by programs outside the browser, the user can enable them if they like by visiting the Add-ons Manager. Chrome has left Firefox behind in this regard, recently many users have started to report an extension installed without their permission, malware can use this flaw.

And guess what! this feature was landed in Chromium which will likely notify users by showing the puzzle piece icon (currently replaced by the up arrow icon) in the Chrome menu that the new extension has been added (extension name) which when clicked shows the box extension installation dialog with options to “enable extension” or “Remove from Chrome” at the bottom.

The dialog box will likely appear with the message “another program on your computer has added an extension that can change the way Chrome works .” 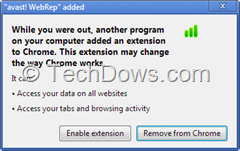 It may take some time to get a stable version of Chrome, meanwhile you can install Extensions Update Notifier for Chrome which also notifies about the same.

FYI, Chrome already protects its users by blocking installations of third-party extensions that could be malicious, and at the moment, only extensions from the Chrome Web Store can be installed by default.

How to Sync Google Chrome Extensions