After notifying Nightly users of the new tab page changes via a tour, Mozilla announced today that will show suggested tiles (appears based on user interests) on the New Tab for Firefox beta page (coming next week, could be version 39) users and later, they will appear to users in the release channel. Promoted or sponsored blocks are clearly labeled as such (check screenshot below).

“So what happens next? Suggested parts will go into Beta soon and then release later in the summer. Initially, users will see ads for “Affiliate” Tiles for other Mozilla causes and Firefox products before suggested Tiles from our content partners appear. Please note that we will be releasing the product in phases, starting with US Firefox users first.” 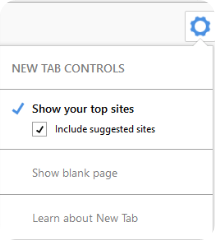 Fortunately, the non-profit Mozilla is offering users a way to opt out of showing suggested tiles to them.

Enable Do Not Track in Browser and Forget Sponsored Suggested Blocks

1. Enable ‘Do Not Track’ in Firefox browser: Options > Privacy, check ‘Tell sites I don’t want to be tracked’.

“if you set DNT=1, it is possible that you are not getting Suggested Tiles. You can simply enable them on the new tab page with the cog. We made the decision to exclude users from all Sponsored Tiles experiences if they have DNT=1 from the start, as we believe that most early DNT users are trying to opt out of all advertising experiences. However, it is important to understand that no tracking is involved in the delivery of Tiles. “