Microsoft Edge gets Chrome side panel

Microsoft Edge received Google Chrome side panel with the latest Canary update and is now activated and available immediately. However, the feature may be removed with the next update. Here’s how you can open and use the Side Panel in Edge while it lasts.

What is Side Panel?

Google developed the Side Panel for Chrome to quickly access bookmarks and Reading List. initially it only supported bookmarks, later reading list was also added to the panel. You can notice the change in the Chrome 99 update delivered on March 23rd.

Recently, Google started testing Side Search in the Chrome browser. It also uses a side panel to display search results

It’s worth noting that Chrome will display a single side panel which means the browser shows search results or Bookmarks and a reading list.

How to open and use the side panel in Microsoft Edge

Like other Chromium features, Microsoft Edge for the first time gained Side Panel on the Canary channel.

The feature is available out of the box at Edge 101 without having to enable any flags and is visible in the toolbar, uses the same Chrome icon.

You can open the Side Panel in Edge by clicking its icon in the toolbar. 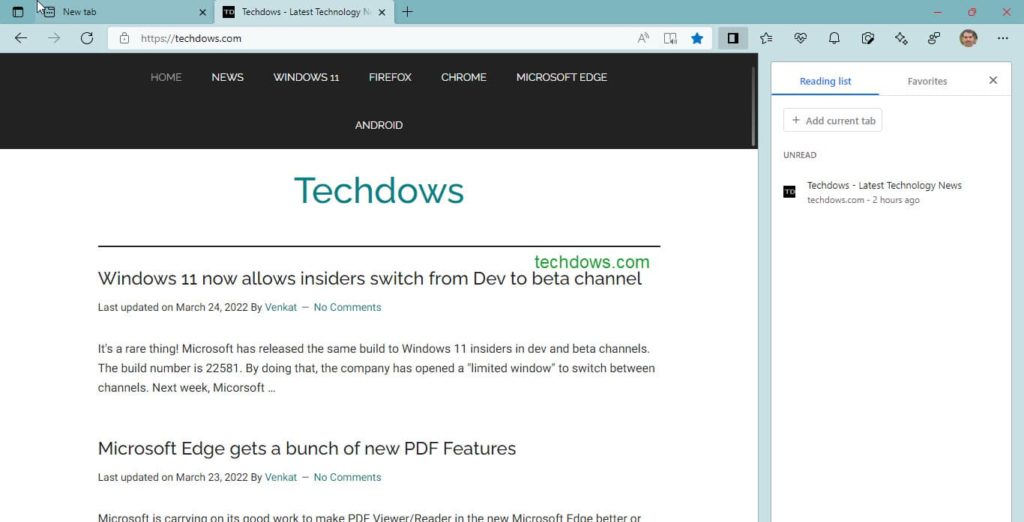 edge views reading list and favorites in the Side Panel.

As you’ve seen in Chrome, using the feature is pretty straightforward.

Side panel will be short-lived in Edge

Citing low usage on the Edge Legacy, Microsoft said it will not bring reading lists to the new Edge. Side panel availability in Edge can fill the feature gap becoming stable

Looks like that won’t happen, as Microsoft Edge developer William Devereux confirmed the presence of the side panel feature in Edge as a bug. So you can leave at any time.

This isn’t the first time Chromium’s upstream change has only taken the chrome feature, in the past Edge got the Chrome extensions menu button this way but it disappeared the next day.

When using a highly unstable Canary build, you should expect these things. After all, there is no guarantee that every feature tested or shown in the Canary branch will make it into a public version of Edge.

final words: The latest Canary update brought the Side Panel to Microsoft Edge for users to quickly access bookmarks and reading lists. However, the feature may soon disappear with the next update as Microsoft Edge Senior PM confirmed this as a bug.

What’s your take on the Side Panel’s first appearance in Microsoft Edge? Let us know in the comments below.

How to Enable or Disable the Office Sidebar in Microsoft Edge

How to Create a Custom Primary Password in Microsoft Edge