How many of you disable Cortana after installing Windows 10 or don’t use it, and if you hate Cortana for showing unwanted web results in the start menu when you search, the personal assistant created by Microsoft for Windows 10 might not show up for you unless you start it intentionally. As revealed by Albatross, MS plans to separate Windows Search from Cortana in the Windows 10 19H1 build. Note that the changes have not been officially announced or made in the insider build, but the screenshots say it could happen.

In the image below, you can notice that Cortana and Search have different icons on the taskbar, and the search icon on the taskbar can be hidden using the option present in the context menu.

The second photo posted by Albatross on Twitter, tells us that Cortana no longer engages when you search in Start, the default behavior is to find and display Bing web results on the screen, here Windows Search limits the search to PC only . Know recently that Microsoft has introduced improved search indexer mode to index and display files from all drives on your PC when you search, so your PC search experience is better when you avoid Cortana. 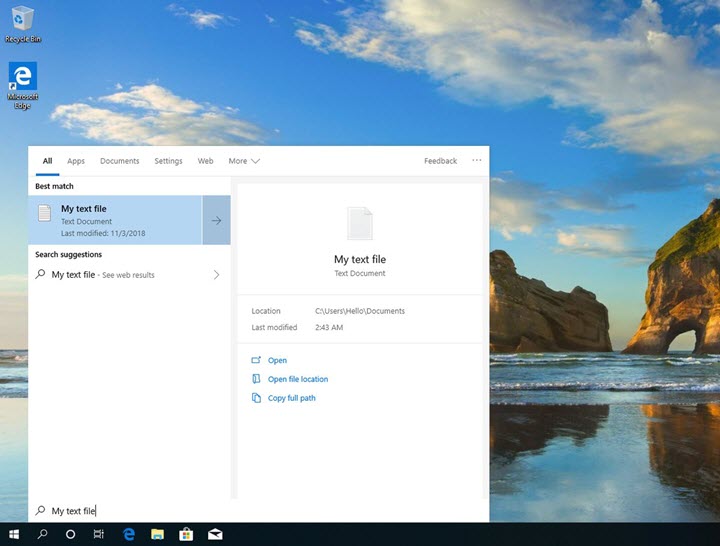 You can launch Cortana by clicking its icon on the taskbar. These changes definitely make sense.

At 19H1, Microsoft is planning to separate Windows Search from Cortana, a smart move in my opinion. Here’s a little preview: pic.twitter.com/1TZvQFNInV

In other news. recently released internal version, allows you to remove more built-in apps via the start menu.

Is this the beginning of the end for Cortana on Windows 10?