Whether you are going to use the New Tab page in Firefox browser or not, Mozilla decided to experiment with it more: as they added sponsored blocks to New Tab last time, this time they added ‘suggested’ tiles.

When opening a new tab in the latest Firefox Nightly, you will see a big popup saying that ‘New tab received an update’.

The first slide says: “To provide this service (new tab), Mozilla collects and uses certain analytical information related to your use of tiles in accordance with our privacy notice.” And the slide shows how to disable this feature.

second slide says: ” New tab will show you the sites you visit most often, along with sites we think might be of interest to you. For starters, you’ll see some Mozilla websites. ”

“You can remove or pin any site using the controls available in the rollover.”

third slide: “Some of the sites you will see may be suggested by Mozilla and may be sponsored by a Mozilla partner. We will always indicate which sites are sponsored. Nightly will show you the sites that most closely match your interests on the web”

Click the New Tab Controls gear icon, in the menu, you can uncheck the ‘Include suggested sites’top sites will still be displayed or select ‘Show blank page’ (check screenshot below). 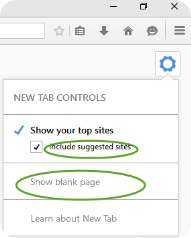 This means that Firefox’s new tab page may soon be available on sponsored and suggested sites, what do you say about that?