Mozilla is looking to add an avatar button next to the hamburger menu in the upcoming Firefox 68 to allow you to manage your Firefox Account and access sync preferences and connect to another device without needing to visit the Sync section in Settings under first place.

Firefox already offers the ‘Join Sync’ option in its menu which leads to the Sync Section in Settings and allows you to create a Firefox Account (if you don’t have one) and after that start syncing your bookmarks, tabs, history , passwords, preferences and add-ons so that they are also available for access on other devices. 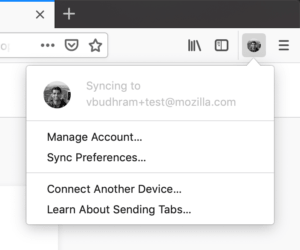 Now, the company wants to make Firefox account and sync more discoverable in Firefox browser, for that they are adding an avatar button in the toolbar that brings up the Firefox Account menu and offers options to check the sync status, manage your Firefox Account and go to Sync Preferences.

Mozilla says in a blog postcurrently, they are experiencing it, but from Firefox Account Discovery and Avatar Bug Sync they want to release as the feature in Firefox 68, ATM, the company has set the importance of the bug to critical and the feature is not enabled by default in Nightly.

It’s unclear if Firefox shows the FxA avatar icon by default in the toolbar even when the user hasn’t turned on sync, but the screenshot suggests they can do that while trying this thing out.

March 20, 2019 Update: The latest Nightly update (Firefox 68) added the Firefox Account icon to the toolbar (check the screenshot below). If you don’t use Sync, you can remove it from the toolbar by selecting the option present in the context menu icon.

Firefox 60: How to Disable Firefox Sync