Opera to block installation of third-party website extensions by default

If you’ve been following the buzz on the web lately – without notifying users, Chrome made it difficult to install Chrome extensions hosted elsewhere, user has to drag and drop the extension onto the Chrome extensions page to install the extension, this generated some debate, Chrome team leans on, they did it from user security perspective to prevent malicious extensions from being installed, now Opera follows Chrome down the whitelist addons.opera.com by default, to allow installation of extensions, users in the next few days need to whitelist the sites from which they want to install extensions. Unlike the Chrome team, Opera here informs users about this before making these changes.

Opera has encountered some people trying to use Opera’s extension framework to create malware, although Opera reviews the extension code sent to them and only approves it if the extension follows their guidelines. They have no control over extensions hosted elsewhere and any user can easily click “ok” to the security dialog shown by Opera on third-party websites and put themselves at risk if that extension is malicious.

Rather than letting users know about this change as much of a surprise as it did for Chrome users, they are announcing this change much earlier and will announce it as soon as they implement it in the Opera browser.

What we’re assuming is the user’s need to whitelist third-party sites by adding it under “Trusted Sites” in the Security section on the Advanced tab. 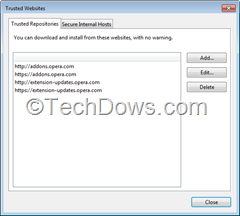