SnagitTechSmith’s Screen Capture software has a new major version, Snagit 12 was released for Windows and is available for download with new features and improvements. Until now Snagit offered simple video recording, now it allows you to remove unwanted parts you recorded in a video.

video cut– “The new ability to trim video in Snagit makes it very simple to remove ums, ahs, coughs or dead spaces from the beginning, middle, end… or any small mistakes you want to eliminate. Once you’ve taken a video capture, just drag the green and red triangles to select the part you want to remove and click Crop.” Danier Foster, TechSmith he said in a blog post.

TechSmith has created a new style of capture that is not good, unlike previous versions when you capture something, now you have options to capture the image or video that is not intuitive for the user. 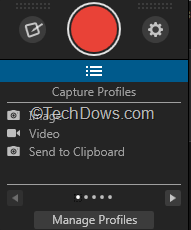 Snagit no longer supports Windows XP and Vista. Text capture mode, one of the profiles existing in previous versions has been removed from this version.

Changed one click to capture window, ‘provides immediate single-click access to all capture profiles as well as new capture workflow’.

Where do unsaved captures in Snagit go?

Snagit 12 now requires . NET Framework 4 complete to be installed on your computer to work.

What is your opinion about the new version of Snagit? Ask your questions or share your opinions if you have any in the comments.