This is the new UI design of Firefox Stub Installer

Mozilla is ready to change the design of the Firefox Stub installer. You can identify the new design by downloading and running Firefox 68 beta setup, the background image has changed when compared to the current one and the company is trying to hide the background image when high contrast theme is detected on the user’s machine.

This is new Firefox Stub installer UI design, we also put screenshot of current version stub installer below for comparison. 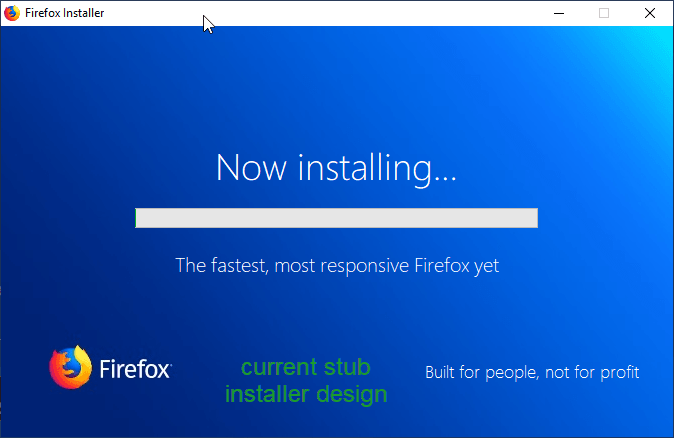 Once Mozilla gets comfortable with the visual design, they use these assets for other channels like developer and Nightly as well. Access to the associated bugs is not publicly available, so we cannot provide links to them here.

In case you didn’t know, Firefox 55 is the last version to ship with design changes for the Stub installer, where there are no advanced options provided to the installer, the user needs to download the full Firefox installer to access these options. Mozilla still continues to improve the browser installer, for example to ensure that the user does not have to download Firefox from scratch when a network failure occurs while the installer is running, the company has added Resume support to the installer.

The stub installer is commonly called online installer where the latest version of the application as per your system architecture 32bit or 64bit will be installed online. If you have decent internet connection speed, you should use this installer instead of offline, which can of course install offline on multiple systems.